Speed up the Tick

The tick is taking longer and longer. I need to find ways to speed it up. Some starting points:

You know that my preference is #5 as I want a galaxy with a slower tick rate.

#1 sounds like a smart practical idea. Does this data actually slow down the system that much just by existing on the same database? I’m guessing that moving it the first time will be an unmitigated mess, but that creating a script to move galaxy data when rounds end in the future would be a cleaner, automatic process.

#4 is the simplest to do naturally. Throwing money at a problem is not always the best answer though.

#1 likely has an effect, though I’m not sure how large.

#2 will probably be where I start, as that’s a requirement for #5 anyway.

#3 will be nice too, as the game as a whole would receive performance benefits as a result.

#4 is a last resort, and ideally won’t be necessary.

@TIF and I disbanded the majority of our billions and billions of military units. Is there any improvement in the tick speed at all? 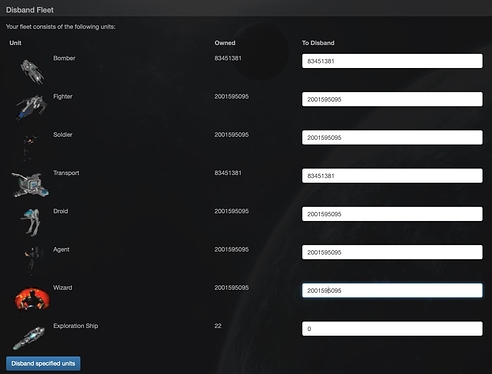 This was brought up again recently here.

This is becoming a more urgent issue, gonna move it above Rebuild Support for Mal's MapGen for now.

This is pretty nasty, and I will be aiming to get this back under 1 minute maximum.

3 posts were split to a new topic: Galaxy-Specific Tick Schedules

I don’t know what it’s up to. tick seems normal ,but having trouble navigating the pages after the tick. some testimonials from my fam.

GhostfacE (fart squirrel)Today at 11:06 AM I keep getting server error. Won’t let me log in Ahhh I have like 7 massive fleets out

I got fleets to trigger !

Thanks @TheBigOne. Report shows at under 3 minutes for the tick itself:

This means we have another problem: pageloads after the tick completes are adding another 2-3 minutes on top. Not good.

Which page were you trying to load?

pretty much all of em. Map rankings military mostly

I was trying to load the HQ page.

And refresh until tick finished😛

Though, it seems we still have page load problems independent of the long tick. Bleh.

I pushed a change earlier today, the last few ticks have been under 3 minutes.

We still have work to do, but it should feel a little better now.

Thanks for working on it Pie. =)

4 posts were split to a new topic: Staggered sub-ticks

With the new stuff your doing will it make ticks faster?

Yep, the backend transition i’m working on will provide us with general performance gains, which will include both faster pageloads across the board + faster tick processing.

Also, we’ve since paid for a better-performing server, so we should see some additional improvements already, though I wouldn’t expect them to be lighting fast just yet. There’s still work to be done.