Does anyone have anything they’d like to see different about the next round of MW?

I know it’s early, but it’s just around the corner!

As an icebreaker, I’ll go first!

With unlimited eships now, I bet unlimited drafting so you can play with all of your friends would bring in some people who don’t currently play.

Yes that is just an opinion of mine, do you agree or disagree with it?

I don’t see why anyone would want no drafts, but I guess that’s one of the oldest discussions in IC.

Unlimited expos destroyed IC cooperation feeling, made family participation 0. Dont keep it.
Got 3-4 players loging in every day being active doing NOTHING. Because u only need 3 players now.

I have to kinda agree with Zeraph here, i dont think the unlimited explos is good long term. Interesting 1 round sure though.

Problems i see is:

Big families can now jsut explore endlessly, removing the comback machanics poor families always had, that they usually ended up with a fair amount of planets, so could catch up.

secondly families wont have any shares, since poeple just explore full systems at the time.

“Big families can now jsut explore endlessly, removing the comback machanics poor families always had, that they usually ended up with a fair amount of planets, so could catch up.”

I´d disagree here, you basically only need 2 players at all to run the whole fam. One with science who mass explores and FB and one who takes and keeps the planets. In theory that should even help small fams as they can grow even if 4/6 of them are inactive and not building expos. This is spoiled a little though by the huge starting res as they lead to the galaxy being filled within 1 week.

It just makes playing in a coordinated family even more boring than it allready has been for those who are not the most active players. I heard storys about leaders telling their players to aid in starting res and then come back in a couple of days…

I don´t see “no shares” as a disadvantage. It could just help to encourage attackers to work for their shares instead of waiting till nap runs out and mass rape bankers…

Expo cap to be changed to unlimited but need time to go past 8. Grow 8 a day.

The explo limit was there for a reason, I don’t mind experimenting but lets learn from it and see that this is not a good change for the game. We are less than a week in the round, one individual player has more planets than every other family. Please end this and start the next round 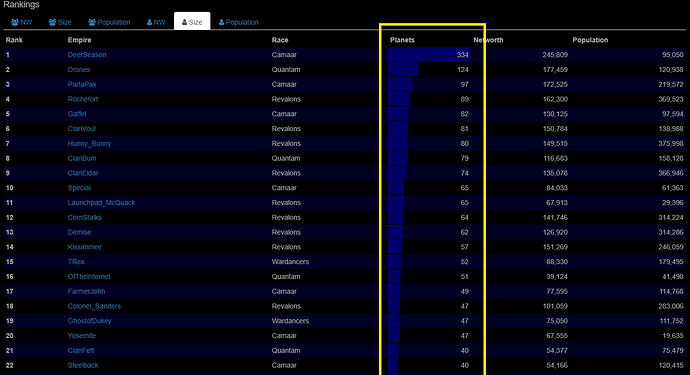 Lots of stuff was there for a reason, doesn’t mean we shouldn’t challenge it.

You guys are rolling over too easily if you think the round is won already. And if you’re sticking with your NAPs then you are also contributing to their win.

I don’t disagree that we should reconsider the change, but is it really worth giving up already? The next Evo hasn’t even hit yet.

Round just started lots can change fast…i think this forces fams to be more aggressive at bor and not con jump as much unless naps are on place. Otherwise you can be raided very easily.

I am not exactly rolling over but in my head the main issue with IC is it was not very balanced which caused players in small fams to quit playing because they were constantly getting ran over.

The 8 eship limit was a balancing measure and removing it just makes the game less balanced.

This change is just a huge boost to top families, it allows them to crank out a ton of eships, and fill the galaxy leaving small fams nowhere to explo and forced to start wars with much bigger fams to get out of their very limited cores.

I haven’t been following IC closely lately so will have to read up on why the change was made but I can’t imagine it was made to help balance IC.

It was a mix of things, but the larger overall factor is that we’re on a new release cycle with code changes frozen outside of planned release dates.

Uncapping the explo limit was a companion change to Infinitum Update 2020.1, which made exploration there more restrictive:

When active, you can explore freely within a system until you have presence there, at which point you must take additional planets by force.

Both of these changes are meant to shake up explo and help us get a sense of where the underlying imbalances are. As an example of this in action, @Mrblonde has started a thread to discuss a potential solution that may change things for the better overall, with or without the explo cap. This is the exact type of response and brainstorming from players that I was hoping for.

It’s a painful process, but a useful one.

Is the explo cap a balancing mechanism, or a bandaid for an underlying problem that we’ve really never had to confront until now?

Sometimes if you don’t wear a bandaid, the wound will get infected and can potentially kill you

I hate to admit it but I really like @Mrblonde 's idea. I just think the current state of exploration stinks and hopefully we see something different next round even if its just not going back to the way it was.

The world has come to a terrible place if @Mrblonde is the voice of reason.

The idea of removing the cap, but it still being on a counter is interesting.

Hey , woah are you for real? Who is that player ?