Now that the rankings are in, let’s take a step back and think about how this round went and what we want for next round.

I’ll be setting up Milky Way 66 roughly 24 hours from now, and would love to hear your opinion. As a reminder, there won’t be any setup polls for MW66 so now’s the time to share your thoughts.

Please keep it constructive, and the more specific the better!

Here are some points to start with, but feel free to add anything you want:

Too big map and too small systems. Made the whole round super slow and allowed all families to keep doing construction jumps until 10 days before EOR. Imperial Infrastructure.

A certain balance between top families. 3-4 drafts on 9 player fams seem to be fine.

100x100 galaxy with 12-17 planets per system. Same-ish amount of planets, so I guess half the amount of systems.

Also, I think 7 man families instead of 9 would increase competition at the top even more, but as it’s a stay in family round, maybe that’s not applicable for next round just yet.

Networth attacks - no limit on size of player hitting smaller members, this is pretty much a recipe for any new comers to the game getting absolute owned then leaving. IC is an intense game, so the ability to fuck over any new small players without consequence for the most part, is lame. Maybe fixed with extreme re-working of the morale

fix the networth attacking things - keeps the largest fams at war with each and the smaller fams fighting themselves. Fairer and more enjoyable for everyone id say.

Things i liked most: 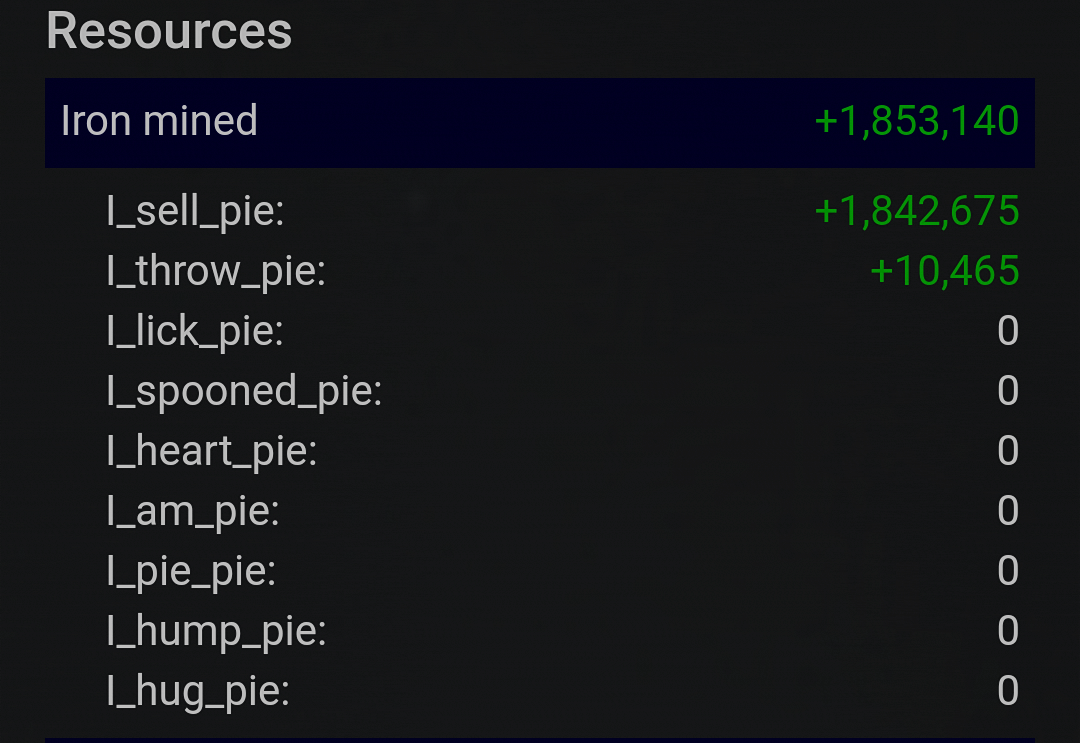 Having higher nw than 29 eor jump, almost 200 ticks before eor 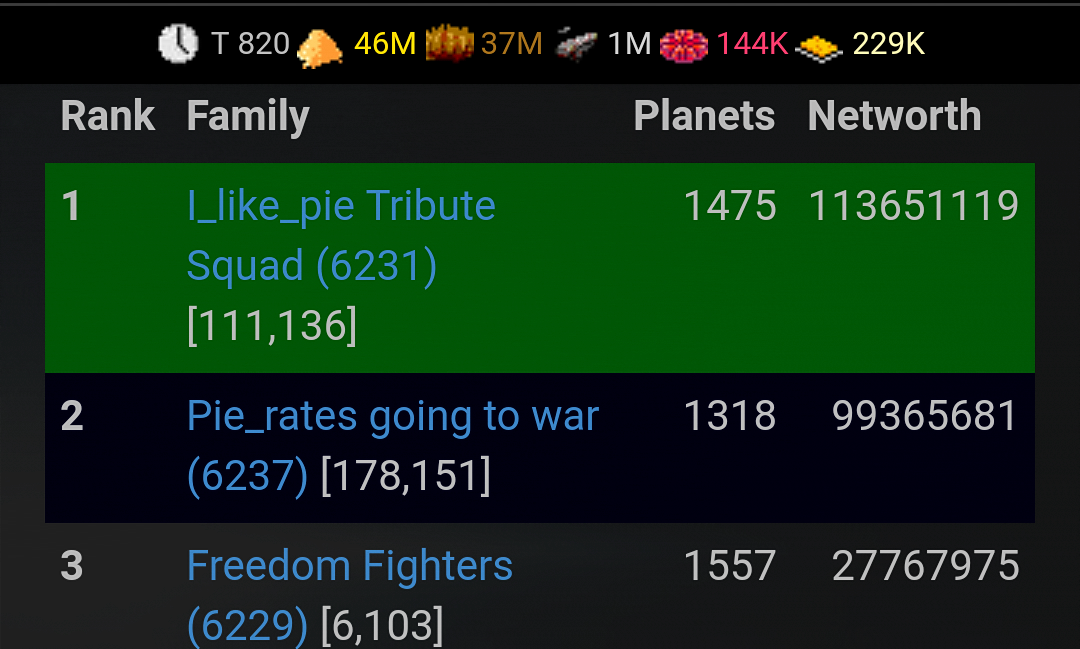 The reincarnation of I_lick_pie from banker into attacker. Once mw filled, he explored 90 planets, we killed him of and he rejoined mw as a camaar.

i liked least: 6329 trying to win by farming little families

i liked most: the other top families not farming the little ones alot and my fam being a top family despite not have been organized enough to even use a builder, how much all others must have sucked lol

for next round: a real reshuffle, not stay in family and 7 player families with max 3 draft spots, minimum same amount planets in bigger systems

Should cost morale to attack within the family.

Map size too big, system sizes too small. Am open to testing the small system sizes with smaller map, but think it mitigates opportunity to fight and therefore creates the ‘boring’ environment we all just experienced.

Least favorite part is pretty easy - 70m NW player attacking me at 4.5m NW or whatever. Just seems like it shouldn’t happen, ever.

Octarine hurricanes are terrible. Their random chance of failure should increase. I had 3 OH on me the entire last 2 weeks of the round and the folks casting them NEVER failed.

I’ll jump on the band wagon here. Way to spread out. Systems were to small with a huge travel time between. Other things that sucked were more total game tweaks which i have quite figured out how to word in an idea thread yet to make myself useful so no sense crying about it. So yeah system size/distance

most liked more players are coming back to game

No shuffle, next round gonna be old skool fun!

I think #6230 just wanted to have an impact killing the 155 mill pop from our pax, which failed. If succeeded it would have grounded us, or at least severly limit our attacks.

I don’t think #6230 had the resources to jump bigger fleet than our main attacker. Nor did they have enough active attackers to win on morale.

As for us raiding them, 1300+ laser traps… , raiding down ground, no free lunch there.

When the dust settled 50 minutes before eor their 3rd size rank was still stable.

The only reason for them to put an effort in retakes, assuming they were online in the first place, was to deny us (#6231) a win and grant #6229 a win.

@Sol_Invictus, to conclude, based on the last 50 minutes, I agree with you #6230 wanted us to win

Side note: I like pie tribute squad won’t be playing together next round. 8 players not returning.

What the lady sings…

He got free expo from us, maybe 120-150 planets.
He also blamed undeadbizzaroskratch for being our spy after we beat their planet size

He just a bad loser.
Lmao.

I don’t think #6230 had the resources to jump bigger fleet than our main attacker. Nor did they have enough active attackers to win on morale.

sorry dear, but here u are wrong, i could have out-jumped all of ur attackers, we had 1,5 billion gc saved.

sorry dear, but here u are wrong, i could have out-jumped all of ur attackers, we had 1,5 billion gc saved.

I don’t think LG is referring to GC… He’s talking about resources, as in: iron/endu.
But I could be wrong.

that included ressources, we had enough saved (wouldnt have been enough if u jumped ur bigger attacker once more instead of i_am_pie)

that included ressources, we had enough saved (wouldnt have been enough if u jumped ur bigger attacker once more instead of i_am_pie)

Raping @MTG_Dad his fam from the start, to the point he gave up leadership. I think I should do that more often seeing it was my fav. part of the round!

see and this is a problem. if u act like this nobody will like you. u are bullying little players of small families, but when it comes to direct competition with a fam which isnt max half ur size u struggle.
ur fam has been bigger then my fam, but planetwise i was up against you, not only have i retaken all planets u took from us during ur early game raid against my bankers but i have denied ur spread into our area and arround completely. u dont see me impressed by ur attacking skills and i will clear u whereever i find u, any round