I show up and type for a few days, weigh in a bit, and all of a sudden this gets bumped to the top of this (of all forums) “Automatically”? 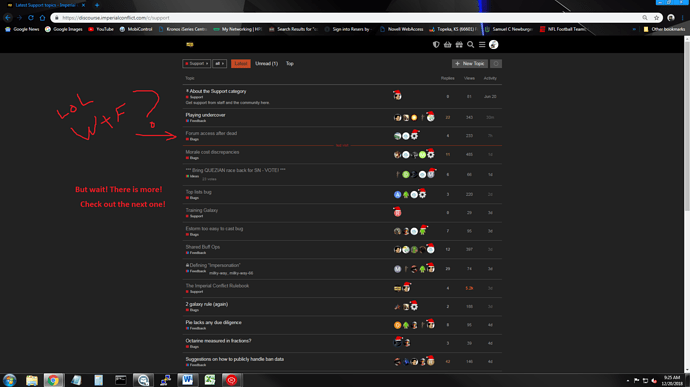 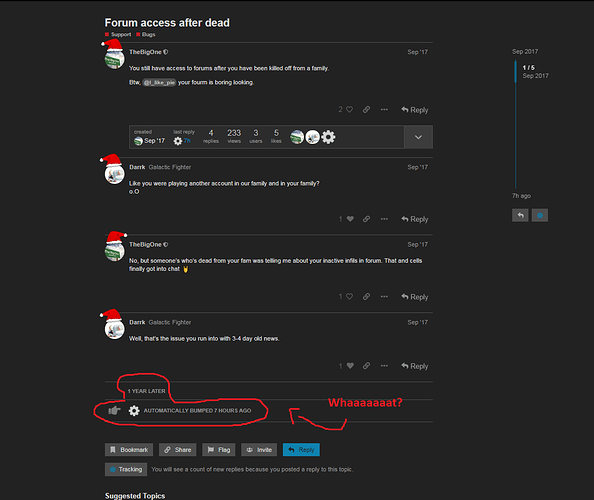 So which is it?

Mod cheating? (What else is new?)
Coincidence? (Lol sure)
Algorithm? (lol why?) 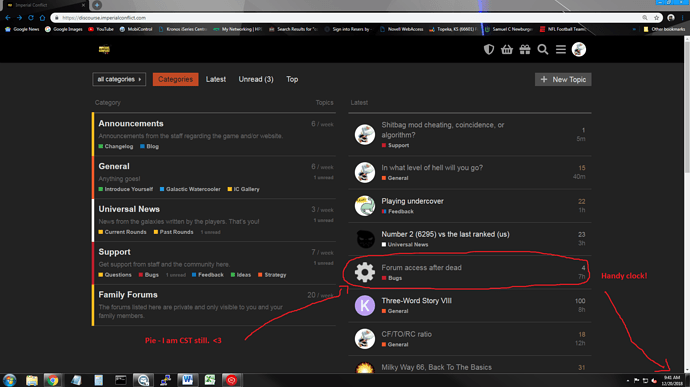 Are you saying the mods are bumping a couple of old threads so people can’t read your posts in other threads?

If I had to guess Pie set something up so unresolved bugs get bumped from time to time.

It was just such a weird one to see bumped and after all this time, and with me just coming back to type a bit.
“Automatically”.

I would suppose a record of why this topic was bumped.
'Cause that is how 'dem pesky 1s and 0s work.

No accusing - tho omg (there would be a reason).
Just asking.

@Darrk - giving people the benefit of the doubt, where does the 'Shitbag mod" part of the text come from?
Is that referring to something in your pictures (I can’t seem to find that), or are you implying someone here is a shitbag mod? If it’s the latter, I suggest you edit your posts.

As for how this got bumped, the system automatically bumps old bug reports that are not resolved, to keep that floating until they are resolved.

Just seemed wildly coincidental that I am back typing for a few days, and that popped up - (as an automatic) and the sleeze that was going on during the time that it was made.

Chubbz bragging about his well worded IA in the 2 out of 415 days I have been on - pops to the top of the forum?

Benefit of the doubt?

Literally would you put 100$ dollars on the Browns making the playoffs right now?
'Cause you have a better chance of that happening.

(It is 1%, mathematically still possible but no-one is betting on it)

When Pie see’s this, if he can check - I bet he does (I love to bet!)
Wild math anomalies on his system make (and some say keeps) him hard.

Also, it wasn’t a year.
Aaaand the forum says a year.
Thus the pics.

Mod cheating? (What else is new?)

Still this is quite a nasty accusation.
Also you made a wide range of assumptions in your posts.

Also, the one year line, and the bump line, are not related.
One year after the post the one year line appears. That one doesn’t bump anything.
The bump happened 7h ago from your post, hence it says: 7 hours ago

@Hala
Does not the question mark, and the other possible examples (accompli with their own question marks!) make it a question and not an accusation?

I appreciate you feelings man, no one like having their nose rubbed in shit.
Maybe that ticket should be closed?

Well you discredited your other examples yourself. I still have no fucking clue what this thread is about

So which is it?

Mod cheating? (What else is new?)
Coincidence? (Lol sure)
Algorithm? (lol why?)

Does not the question mark, and the other possible examples (accompli with their own question marks!) make it a question and not an accusation?

So you come up with 3 possible scenario’s - of which one is apparently a mod is cheating, and you’re saying that’s not really an accusation because it’s only one of the scenarios your proposing.
By that you are saying it could be a cheating mod. Without any evidence, or franky, torough assessment of the situation on your side.

Maybe that ticket should be closed?

I could, if this was a ticket, but you made a public forum post of this, hence Pickle is also enjoying himself here.

This isnt the ticket!

@Picklearmy always has fun, I mean really- it’s his thing.

Why hasn’t the ticket:

You still have access to forums after you have been killed off from a family. Btw, @I_like_pie your fourm is boring looking.

It was a player bragging about his thinly veiled IA and that his source could still read our forums.

If the forum was still readable, and he knew it well enough to note it was “boring”, it was IA - or at the very least - exploitation.

If that keeps getting bumped because it is a “ticket” why isn’t it, or hasn’t it been closed?

415+ days later.
I mean he is even a mod (now) right?
The issue is resolved yes?
The tickets / bump system you all can see correct?

So this issue fixed forever ago (I mean it had to be right?)
Could/Should have been closed forever ago?
But has been popping at the top of the bug forum for a over a year?

What - does every-time the system kick it to the top, he covers himself in penutbutter, puts a rubber glove on his head and masturbates to “Hey, I’m a Squid”?

Don’t make me find a gif.
Its out there man.

What - does every-time the system kick it to the top, he covers himself in penutbutter, puts a rubber glove on his head and masturbates to “Hey, I’m a Squid”?

If I could just spend 10 minutes inside your head

And that wasn’t a sexual reference