Press Release: Family 53 has war dec’d 55 over their desire for planets… The past 3-4 days they have been trying to get portalled in 55 systems with zero success, apparently, they like to ping pong planets with 55, as thats all they have done.

Since we really only have 3 weeks left until the end of the round, this war will likely end up being the last big war either will have. So i am sure both sides will have as much fun as they can. Jets has already vowed to fight to the end, echo-ing my claim, we will do the same…

Friends war, will be fun. No holds barred. Bragging rights til the next round on the line… and we know how that goes!!

Nai tried to sugercoat this and he talks like he knows what we been doing. 53 has tried to minimize 55 loses ,but as Nai stubbornness is getting the best of him. This will now become a bloodbath with 55 getting the worst of it. It didn’t have to come to this. I been honorable ,but Evil Jets is making his return and Nai 7055 has unleashed the monster within.

You could declare on both us @HydroP 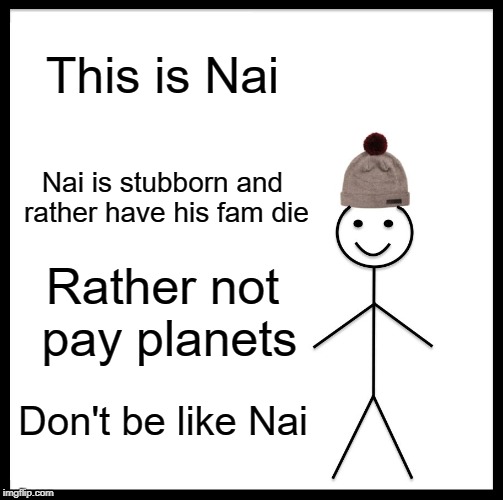 live the beenie hat… mine are actually maize and blue for Michigan Wolverines… just saying.

What i might add, is, they are up a few planets, but no systems, its just a matter of us finish off our retakes. They are gonna waste so much trying to get so little… if anything for all this… so, only thing left for either of us, is to just have fun. We’ll op and we’ll retake, and we’ll reportal til the cows come home… we have no shares, thats pretty much all it will ever be.

Abusing the morale feature by jumping the 8 planet empire. Flamed whiteshadow for doing this and then use it yourself. haha

Morale .. why is broken, has always been broken, and how to fix it Features

When Stefan and Mastermike introduced Morale to IC>. I lobbied hard against it, before during and ever since it was introduced. Its broken cuz they base it on a players planet count… its rooted on the difference, why you see changed between attackeers etc… But, what that means is the little guys, being over run by multiple attackers who have more active players in their families, cannot fight back. It was intially introduced as a means to prevent the little guy from getting over run… is actual…

There is a fix. drop a player to 8 planets and clear him…

This whole war is over 4 systems lol I don’t know man I like that you guys are putting up a fight. ,but you will lose even more portals. Even more infra as the days go on. Is it worth it or is it better to cut your loses and stay intact. Live to fight another day.

You could declare on both us @HydroP

Not his style. Contrary to what some may think

The Slut loves a fair fight.

Gluck to both sides. Friends in both!

Congrats on taking planets from our smallest player. Your first busted portals. Only took how many days.

we are reacting as fast as you act… so, meh… you want things to go faster… your the one setting the pace… hell we are still jumping out guys thru all this.

Nai when are we gonna end this fake war. I will settle for 680 planets as a fam make up the difference and we can have peace.

we can let you keep the 2 systems i mentioned in discord. Or - they are easy retakes for us, and we just keep ping ponging this war… otherwise… the status quo is our counter offer.

War over confirmed. Was fun

Obviousily here was some attention paid to 53 from outside parties… but the war in and of itself was fun… they got 1/2 their goal… 2 system with position and shares with other targets, and we gained a few planets from other systems, so we also gained a little spread.

Was a fun war, and we enjoyed it! Thanks 53 for being good sports!

Not 100% accurate because before war. Planet counts were different. Good war. Was fun.