Why is this even up for debate this is stupid and a waste of your time and ours even debating this.

Of course if someone stops logging into X accounts in Y galaxy they should be marked inactive!

It’s not a debate; it’s a way for us to see what is most needed. We have to prioritize the different work the game needs across our limited available dev time.

That’s up to each player to decide, and they can do so by voting.

What a weird title to make Shane.

I didn’t make it. Salty pie did lmfaoooo.

How am I wrong?

You complained about it being a debate, when it is not a debate.

If you put something up for a poll and ask for the community’s input, it is definitely a debate salty pie hahahaha

that’s not what a debate is lol

i agree with you there

you are so fuckin weird lol

If you put something up for a poll and ask for the community’s input, it is definitely a debate salty pie hahahaha

It wasn’t a debate right? It’s the way the whole idea/feature system currently works. You post an idea or a feature on the forums, and people get to cast their (limited) votes, to the ones they like best and want prioritized. If people think this should be implemented ASAP, then everybody should vote for it.
According to you, everybody wants it, yet, not so many people have voted for it…

Aren’t empires automatically deleted after 7 days of no login? What would “marking them inactive” do?

The checks got expanded awhile back to include inactive/rogues and shorter windows, but the process isn’t fully automated yet.

Is it partially automated? LOL

you are BG in SN aren’t you?

Yes, it is partially automated. I’m not sure how that needed further clarifying, or why it’s funny.

I assume he is BG in SN as well as he seems unable to control his laughter. 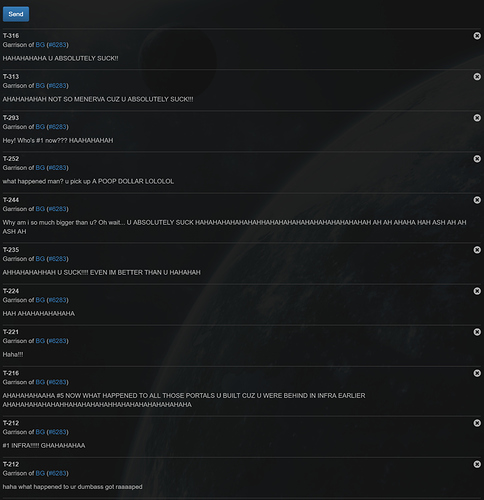