Blocked empires have been updated.

It used to be that blocked empires were protected, and for sufficiently severe violations they were outright deleted.

Now, neither happens. Instead, they behave similar to the Inactive Handling Updates.

Other families will not be able to tell that the empire is blocked, and to them the blocked empire will defend as normal.

This information is presented only to the family members of the blocked empire.

This information is presented only to the family members of the blocked empire. 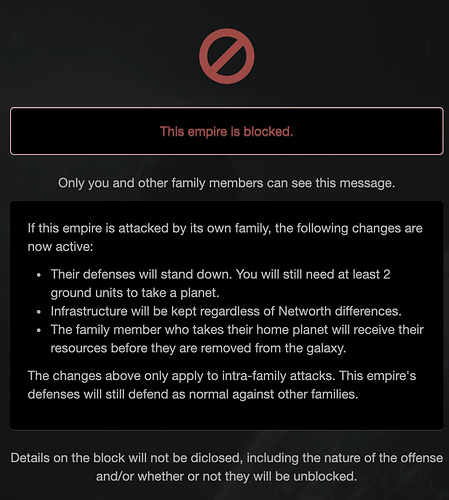 If player A is in protection mode and they attack a blocked empire (player B) within their family, would that count as an attack and remove protection mode from player A?

Good question! Goes for both pmode and 35% rule protection.

It does lift the 35% rule protection against anyone.

Is that confirmed? I know 35% rule is bugged but didn’t know what the problem was

All I got confirmed is basically anything can lift the 35% rule protection, I think @I_like_pie is looking into it to determine what exactly is the case.

Well I gave it a shot, for science. The backend is throwing a 500.