Break IC for fun and glory!

Hi all, I need your help!

I’m working on fixing up the issues from Tri 28, but in the meantime I can use assistance testing the recent tech overhaul. For those unfamiliar, there is an upgrade in progress that is going to enable much easier development on my side.

However, it needs to be hit hard with testers! Like really hard.

There aren’t any huge functional differences, it’s more just sanity checks to make sure all the normal stuff still works as expected. I’ve tested a bunch and things are looking pretty great so far, but this is where I need your help.

we have on this the faster we can safely release this upgrade, which will unlock a bunch of other great stuff for us.

The Dev Server is open, and running 2-minute ticks with 10 families of 10.

Feel free to post any bugs you find here. Any/all help is appreciated.

3 players will receive a special forum tag and empire badge. This will go to:

Bugs can be reported in this thread directly.

= pre-existing production bug, will fix after the upgrade.

Using sa on second attamept it beought me to the white you have encountered a error page then i refreshed and the issue went away. Will keep looking.

As i counting to try the issue continues.

The SA issue has been fixed. Thanks.

I just pushed out a fix to the fam page, this should be good now.

There may still be other issues though, so lemme know if you still see anything funny.

Having an issue with the cost button when overbuilding. Sometimes it will show the costsbthen other times it will not load anything.

That should be fixed now. Thanks.

A bunch of other changes went out this morning too, which should fix a handful of other similar problems.

This weekend ill have lots of time to check everything out, just peaking around when i can now. Will keep reporting what I find.

This upgrade will launch after Triangulum 29, at the end of this month. Thank you all for the testing so far, we’re in pretty great shape!

We need a last round of hammering

to make sure we’ve found and fixed as many bugs as possible.

A second test galaxy has opened up here for those who wish to help out.

3 players will receive a special forum tag and empire badge. This will go to:

Bugs can be reported in this thread directly.

The tag/badge will be up to those rewarded. An example is below: 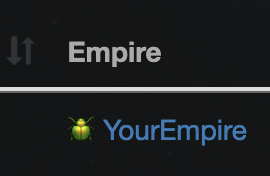 You can find the dev server at https://dev.imperialconflict.com and if you need any assistance at all, feel free to let us know here or in Discord.

Thank you for the help!

Hey, dunno if it’s a bug but when having the planets page as a shortcut it leads to http://localhost/planets instead of the planet page

Welcome to the running!

This should be fixed now.

I guess we are posting them in here. This is a repost from the discord, to keep them all in place:
This is on the “Test Galaxy 2” galaxy. 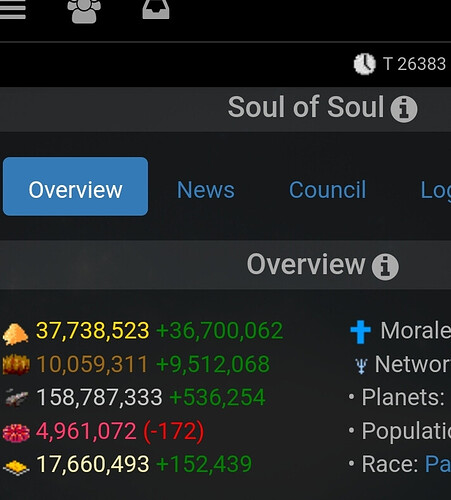 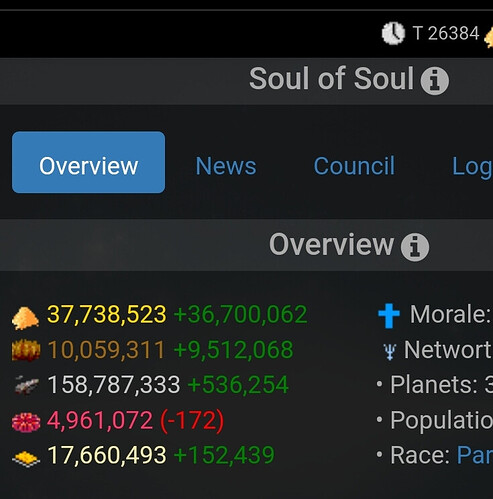 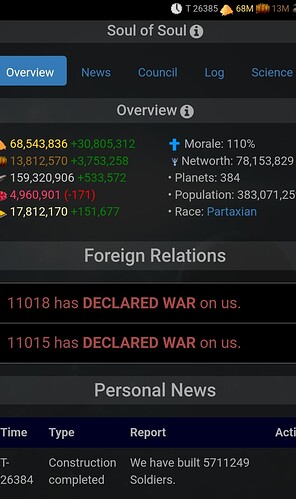 You can also see in Soul’s images that the first two of their screenshots, none of the values changed, not just the octarine. I did not experience that for that tick, but I did still have the octarine issue and I am still continuing to see 199 octarine with (-1) today (a long time after these tests were performed).

You can block and unblock your own empire.

Head to your family, click your empire and that screen loads up with the information. I’d have figured it would either send you to your HQ page instead of load this up, or it would just disable the block/message buttons on this page (so that you can still bookmark yourself (as a related tangent, this could also just be removed since you could set it to always show yourself in bookmarks))

when you go to trigger a attack you get a message

Short version, just to get something in here and not give too much up about HOW it works:

Walkthrough of exploring across galaxies, as requested by Pie:

go to miltary enter coords from another galaxy… for example 33,22:3 select any op. destroy iron - trigger, You have encountered a game error. If the problem persists, mention it in the Bugs forum.

this occurs when you try to cast a spell on a unexplored planet, any op will result in this.