When 2 fams declare war on another, planets that are between 25-35% still get blown up. It should be only planets below 25% that get blown up. This is after being at war for a couple days.

Faq is outdated on this topic

25% rule is about being able to attack, not about blow ups. A few years back you could not attack players that are below 40% of your nw. War would lower that to 25%. Planets would still blow below 35% of your nw.

Both rules don’t apply any more.

Only benefit of war atm is a morale reduction and an attack bonus.

Your answering skills are legendary @The_LiGhTgUnS

WTH … The 40% rule unless provoked no longer applies? Anyone can attack anyone no matter the size difference? If so, why was that change made?

Why things happen in IC ussually remains a mystery for us mere mortals. There is no logical reason for things

_No longer will there be any 40% rule or any sort of family protecting. Instead the new enhanced morale formula is designed to make these attacks possible but extremely costly on morale. Not only will size influence morale loss, but relative family and player networth will

So basically we introduced a new (modern) morale system which made sub 40% nw hits cost 100%+ morale. Than we removed the 40% limit and a year later the modern morale formula got removed without reverting back to the 40% nw limit.

Did I read that right … there is basically no protection for the smaller players anymore?

Ouch!! And they wonder why it is tough to get newbies to stick with the game.

Yeah @The_LiGhTgUnS i’m impressed with your memory and/or sleuthing skills.

For some additional backstory on this, there was an attempt to bring this back as it used to work, but an unexpected bug necessitated its re-removal.

Ultimately, it’s another casualty of the 2015 morale rewrite snafu, along with ops still being impacted by morale.

unfortunate but understandable. i remember how buggy the game was in the early days when entire fleets would vanish, or entire ticks would be lost to server crashes.

@I_like_pie since you bring that topic up yourself: 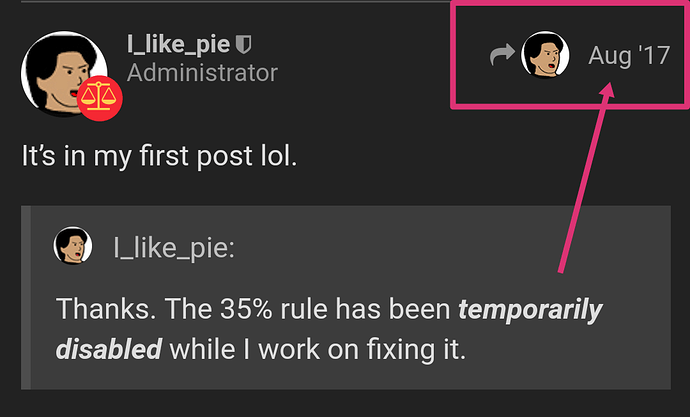 Here’s to another year lol