Hello ( From the other side)

As always, I love you all… Best of Luck… and… Enjoy

TBO either has rocks in his head or balls the size of boulders.

But sure, we can turn your family into a dumpster fire now if you wish.

Can I bring a burger? I mean if I’m going to be a dumpster fire… I want to eat

See that?
Not everyone needs to be a pansy!

You meant that as a standoff not actually a UA?

Yeps, had good chat with Pie about it.
He thinks the IA rule is stupid stupid stupid - but people keep voting for it. (Honestly, I don’t think people understand the ramifications of that rule - I didn’t, thus I asked.)

In this case (a chance for which, TBO just wiped his ass with) we were intending to invite everyone to fight against us for EoR. If that would have been cool with everyone they would have been allowed to fight us, but not collude.

Well if you fight like beast, then you can wipe your ass with our planets!
Good luck all your cool ninjas with your tricky/techy races in 4291!

I hope you guys are up for the challenge!

I think its more…

We wanna fill a void and see if people have what it takes.

Also darrk… maybe next time, you won’t see my race so up close

TBO gives me candy if I send him cash

So… Pie agreed to allowing a gang hit…

You clearly have the lead… it was now or eor… and tbh… life gets hell soon so I figured why not now?

How was an eor war happening if war was Sunday with Death??

I mean everything is… Random 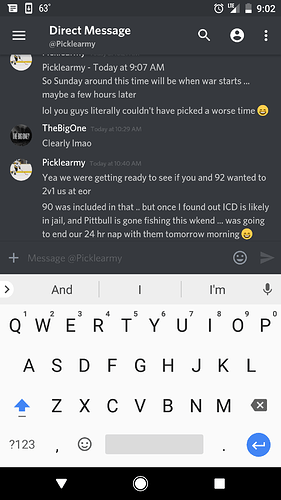 "I’m totally loyal, but don’t care what he says"
Fixed

"I cannot delineate between affectations in a sentence, reading is hard.

Wait…war? what war? …why must we war just cause of naps ? l.ol

Feel free to go into detail about what I misread, I’m still confident that’s an accurate translation.