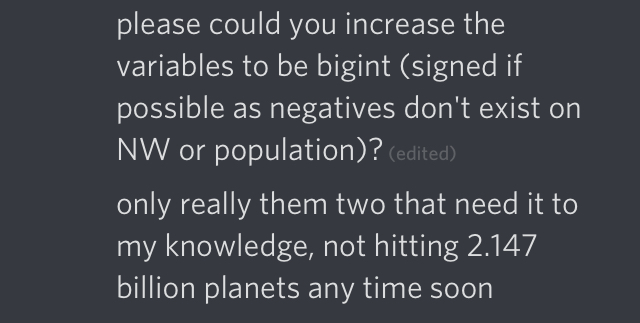 I tried reading this a few times, but I really have no clue what this is about

Signed int is a datatype in programming (PHP in this case I guess) An int can only get so big before it reaches it’s max, and when it does and you add 1 more to it it becomes the minimum if it is a signed int (signed meaning with a sign in front of it , + or -).

A bigint can hold a much greater number, one that probably can’t possibly be reached in IC

easy example of the range of numbers that can be stored in the database:

using Bigint would mean that you can have a population of either 9 or 18 Quintilian depending on if you allow negative numbers or not (which for population you wouldn’t). This would be Bigint(8) (8 bytes (64 bits)).

The same problem applies to the market in infinitum. You can’t sell/buy more than that 2.1bill number.

It does beg the question… if originally it was inconceivable to reach the limit of a signed int, then why is it possible now?

Infinitum stretches the limits. It was only a matter of time before we hit this. We saw this before in the old dev server too with the 1-minute ticks.

This issue is a red herring though. We should take the opportunity to question whether or not hitting this cap should be possible in the first place, even in Infinitum.

Are you suggesting something along the line of exponentials? To make it increasingly Infinite time to reach 2.1bil? Not sure how market would use that but pop could just be a multiplier/new empire event (such as population starving from overcrowding or whatever)-

Edit 2.1bil looks small for pop, being only 3k planets with some LQ

Nah, this isn’t on my radar right now.

It’s good that @MaceWindex reported it, and we should look at the underlying problems, but it isn’t a priority in the short term.

Naah, i’m not saying it’s important or anything. I just wanted it on record so that it is known. Better to know that something exists than to not know.