Here’s another impression of what I’ve seen so far, and my uneducated guesses as to where this brings us.

Feel free to contact me here or in game (if you figured out who I am by now) with more and better insights!

1 The donkies (6279)
Rizzy. He’s got Kamikaze and (the decimated) Chancellor Palprotein, but that nw is just Rizzy. The bastard lovechild of MC Hammer and DMX, you can’t touch this, and he’s gonna give it to ya. He jumped himself to top 5, just rogered Deathdealer into oblivion, and his ground is unbroken. He started late, slipped in under the radar, which made the galaxy gave him the leeway to build up his own spot securely. I don’t see anyone singular capable of breaking his parade towards top dog for this round. And he is doing it as a revalon, for god’s sake. The favorite contender.

2 (6263)
Paytimer, reinforced by Pong. Paytimer, a Quantam, is the second guy with an atypical race for someone pwning so hard. He’s got the center lower half of the gal portalled and at his mercy. Only Sloth and that oddly big Blueberry pax have more planets at the moment, but none of them have the spread and the potential with it, that he’s got. Pong can help, but I don’t see a lot of coordination happening. Still, he’s my second sure thing contender for getting to week 6 in his own name - that from being a totally disregarded pretender in my first pvc. Speaking of which, get a fam name, paytimer!

This is Savior still, a quantam, now reinforced with assimilated Hellenis (attacker, no income, neg research). He’s not there on his own merit, Hellenis is boosting the fam significantly. He hasn’t got the spread of Paytimer or the economic powerhouse of Rizzy. Unless these two guys get with some serious coordination, I see their star dwindling two weeks from now. He hasn’ been involved in much combat until now, but his baptism of fire won’t take another week, if I eye the competition. I don’t know much of his history, so I’ll call him pretender. Feel free to shout out and inform me better, savior.

My upper neighbour Sloth. With his no speed race he’s got the kind of economic rizzy has, AND 50 attack, but hasn’t got the paytimer spread. He’s 4th which is kinda amazing considering he didn’t get the extra nw boost from an extra fam like everyone else. He was 9th right after the merge, and already safe again for assimilation. Well done! He’s a steady factor, and will be neigh on impossible to remove from anywhere he is. Anything but a sloth, and another very strong contender for end win. (Get a pretty fampic, sloth)

Catch, a wardancer, and Gainpot, a pax. Catch is like a bulldog, he won’t quit, he won’t stop, and he’ll fight you till kingdom come over a system. He won’t give anything away. But is he aggressive enough to reach out and conquer more territory? He’s got this unlimited ops strong pax handy, sitting about. Just what he needs. It’ll be up to Catch to get this team train going, and I haven’t seen that kind of initiative yet. But I just have this gut feeling he’s going to surprise. Contender if he does.

Blueberry, a one man wrecking pax train. I’m not sure how he’s doing it, and I haven’t been watching him as closely as he apparantly merits, but he’s got the biggest planet count at the moment. The key to that may lay in the obvious question: who wants to mess with a big-ass pax in a hc gal? Unless someone does, he’s going to get stronger and stronger all the way to week 6. Contender (previously unrated pretender)!

Th3 Hord3, a wardancer, with POC POC, wardancer who seems to have lost the wardance-off in the last days. Th3 Hord3 himself is a fighter and stands his ground, but he’s not reaching out into e.g. paytimer ground. He’s standing still, and unless he’s got a cunning plan up his sleeve, he’s not going up fast. Pretender.

AModernMajorGeneral, the former second fam, but he didn’t get an extra fam or nw boost, like Sloth. He’s sitting there waiting for… what? He’s fortified pretty good where he is, but hasn’t got a super paytimer tier spread or rizzy tier economy. He’s got to break out, or go down in assimilation infamy. Kind of hard when you’re stuck between rizzy and sloth. Also, that fam pic gif is getting old. Pretender.

BG, with a pure banking race. A bit like AModernMajorGeneral, stuck in an island, where everything around him is not up for grabs. His latest addition is an inactive pax, which doesn’t really make for a winning combination. He’s played a fair round until now, but he’s going to have to up the ante pretty soon now. We do appreciate the ever changing poop dollar gifs, BG. Nevertheless, Pretender

Snoggits, wardancer, got some company from MenisfromVenisdom, a Quantam that has a somewhat frazzled look by now. Snoggits has a very solid core and has reached out tentatively to expanding. The coordination with his quantam seems to take off, but he’s going to have to shift gears if he still wants to hold up Snoggits banner above his fam number next week. Pretender.

Yarta, who was exteremy high in planets last week, and looked as if he was going to make it stick. But his no-attack race seems to have brought him no fortune, and he is now paired with Deathdealer, a wardancer, who just got the rizzy special. That’s right, from a revalon. The pair of them could have made something good, but it seems it was not to be. Pretender.

Big Bad Smurf, the second biggest pax left standing, and small Mindshare, who has an attacking race. They would be able to pair up to make the kind of team that could dominate a hc gal, but they lack the size and the spread to make that happen at this stage. If this had happened earlier, or they would be higher up the ranks, they would have been able to contend. Not now, in my opinion. So, pretender.

Wow I appreciate it ZoZ thanks for the generous words I’m defiantly gonna try my hardest to win I really wish I didn’t pick revalons as my race but hey i gotta live with it. And I just infra whored till i felt comfortable now is time for the gloves to come off.

I hear BG is a good guy.

I hear that your actually bg 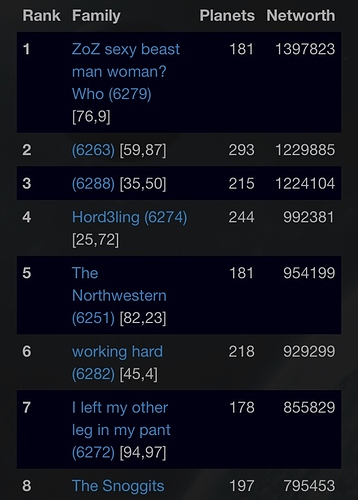 @ZichtOpZee what are you under that storm trooper helmet? My guess is a hermaphrodite beast of some sort.

And that after joining 2 days late!!

Lets hope I get some communication from my new fam, last two players were mute!