Comment:
I will either play alone or play with others for casual fun.
I will be working so I need to play to keep myself occupied.
All are welcome to discord chat for each fam.

We can have general chat if we want to.

I want to test economy and strategy of 0 tick war. After hell break loose, whoever win can win round. or just keep playing and try again warring at end. Whatever you like.

Anyone interested? Join in hyper.imperialconflict.com and find Sirius there! 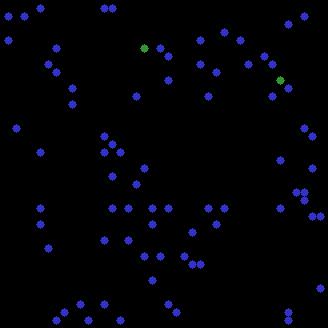 Click the image above or the link below for an interactive preview.

I want to share details happening in Sirius Round 1. I joined first, then audiodef joined with me as a random and also a new player. I was hoping that audiodef could join with in other family but he landed in my family. I made this custom galaxy as meant to be for me to playing solo or casually if others join. I wanted the round to be fun and enjoyable. I wanted to teach new players to learn how to play Imperial Conflict.
Caedmon joined the family. Then a random landed in my family, who is Dimpel. It was funny to see it become 3 v 1 which was totally unfair. But we keep playing.

AS result, Caedmon is very active and persistent infra-building, caught up with three of us combined in networth. I decided to invite Caedmon into my general discord chat server. We had fun chat. Caedmon gave me feedback what the galaxy should be. I invited Nightbyte who wanted to take a break from Milky Way after two rounds with me in family. Nightbyte got motivated and joined in Caedmon’s family.
Now as recently, we finally have third player joined in and it is Hala. I am thrilled about that it is now 3v3, but my family grew very sluggish. Caedmon’s family caught up, as you can see close nw and planets above.

We discussed about it and decided to change from modern morale to hardcore. Why not? I am glad that it was fun to grow and competing.

I want to say best luck to both families. Anything goes. Get your fireworks ready.

Can I get in, or is it for patrons?

Its full, it was open to all, 1 fam 3 players (2 drafts) but both fams are all randoms

Dimpel never showed up on time for the war. So he had over 200 million cahs on him. We’re stuck without building any fleet.

So Caedmon’s family win the round. Congrats to Caedmon, Hala, and Nightbyte.

I was expecting to be this fun war but it did not happen.

i missed the date and helped my cousin to. move into his new house