The idea here is for a more aggressive, less “stalemate-y” feel to the round.
Keep things moving!

You are encouraged to vote more than once if you choose!

We had a pretty good chat with most current MW leaders or a prominent player from most big fams.
These options were kind of a consensus we came too as we found a middle ground.

Don’t agree with the op rule. Imagine BoR as an attacker. pi and IPs and alike would kill you alongside taking enemy spread.

Why one eship? Makes no sense

4 week round for a standard galaxy sounds lame. You wouldn’t even or might not find enough morale Planets to exceed the limit anyway. Especially for two attackers.

HC galaxy it would work. Maybe

Don’t agree with the op rule. Imagine BoR as an attacker. pi and IPs and alike would kill you alongside taking enemy spread.

With Morale gain back from Morale Planets removed - the Flat ops cost of 10% would prevent a Pax from doing 22 estorms in a tick.
The idea is getting more people involved.

Why one eship? Makes no sense

Several of the people wanted it included as an option, so there it is. =)

In 4 weeks there no guarantees you would find that many anyway.

And the one eships deffo doesn’t make sense. What’s 10k gc andfew ticks waiting whilst I have no infra anyway. nothing.

Max eships. Or 4. That’s different. But one…

4 week round for a standard galaxy sounds lame. You wouldn’t even or might not find enough morale Planets to exceed the limit anyway. Especially for two attackers.

You would have as many as you have now.
Morale planet ratio was jacked in '17, but the gainback was never changed (it’s original intention). Basically, (I think) Pie just forgot.
You bankers prolly have 70+ Morale planets between them.

Imagine if they were on you without a gaingback restriction?
Would be fun right?

I did prefer the old 7 ops limit of the old days.

I think the moral one is interesting but they are very very common nowadays. I think it would be very easy to grab enough moral planets for an attacker to get full morale replenish every tick.

Id like a limit to one official alliance per fam too. The rule would have to be player policed though somehow.

Personally the 'staling" of the game is less game mechanics in general but a lack of incentive to fight. I propose that more benefits are given to open conflict and war

I did prefer the old 7 ops limit of the old days.

I agree.
That is what the removing the gainback is all about it.
It is why the Morale Planet count ratio was raised in '17.

Oh the old message is just an example of a conversation from a month ago of him also trying to swing things in his favour.

I don’t dislike you darrk. But honestly. Stop.

The games not broken. It’s doing well. Leave it be.

It needs more stuff to enhance fighting, opping. Not slaughtering it.

I think quite a few people will agree these are good changes to try.
You would have been welcome in this discussion, but something tells me you would have not helped the conversation much.

But if you like screen caps so much - here are the people that actually talked about it, or could view the discussion when they come online. 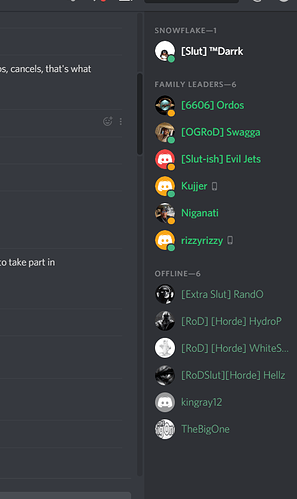 Like I said at the very start, this was kind of a consensus.
I agree personally about the explo ship - but others in that chat liked it.

So many top players there with good knowledge agreeing with you…

Give ur head a wobble.

It’s how you try to enforce them after lol

These are not “my” ideas.
This was a consensus.

I had only agreed with two of the options at the start.

Lee instead of being a *C to darrk how about you make some suggestions of what you would like to see?

A group of mostly leaders discussing what they would like to see next round. It wasn’t Darrk who decided the amount of starting resources he actually wanted 20x or 25x.

Lets try to discuss and make the game better.

Technically, I didn’t join on the conversation, but I was busy at work

Technically, I didn’t join on the conversation, but I was busy at work

or could view the discussion when they come online.

I’ve already voted and would like to try something differenT…I ain’t getting into the back and forth though.