I have my leader and my family playing me and quite frankly I pretty much lost my temper for Good they banned me from asking nicely what my leader told my family to duck me about some help and frankly this was the most frankly fucking unrealistic and very full of shit me being pretty much banned from me gone 40 days of right saying my beef as I am pretty much baffled bye my understanding I am not playing smart or whatever he told the fam as I really am complaining I think he is a fucking either not a smart person or he is somehow n00bish or he is gone overnight bitching what he thinks I really was with him once and we battled tongue creating other then 40 days and I never ever had a fam like this and I am overly wanting some knowledgeably someone take his leadership and straighten out my other fam personally no manners or like I am saying this is the most baffling stupidity have ever seen and frankly it is personal now and i would like the spank job for anyone listened to Parkman to be lectured in him being abusive about his leadership playing me like I am somehow fucking some way he thinks I am not even as capable to play smartly
i.p.o and like I said the fucking guy must’ve been born a dyck stick and frankly I am not appreciate his leadership made me take it up his alley of pathetic our leader is fully full of fucking shit LOL P shit better change or maybe I will dummy his ass lol p

Let me try to address your Forum Post in most polite way possible.

Backstory. This is in regards to Manthano 3 family 7569. Vicious asked for resources to play market, we gave it to him, after awhile we got tired of giving resources to him as he was not using it but to play “market”. He wanted to make the family stronger an attack the other families… Problem with this logic this is Manthano 3 a non attack training Galaxy. We liked his idea of making our family stronger so we started a Jump Schedule, this has been going on for a few months now an everyone that signed up is making great gains an Growing. We invited him to this, do you think he joined? no he did not. Upon receiving dozens of messages ingame begging for aid, an other receiving disturbing messages, most of us blocked his communications. Do you blame us? I am all for second chances, get with us an join the Jump Schedule Vicious, you will need to pitch in though if you want to participate. Its one thing to train someone an have patience an guide them, but Vicious you have been playing as long as me. An as for parkman, he is doing a great job, an keeping us informed with your messages.

Received similar disturbing messages from Vicious in the past. He might grow up one day, and when he does i’ll buy him a beginners English book.

Let me correct that statement. It’s a non attack galaxy for some.

I for sure thought this post was about andro not mantha🤣 is everyone not ss in mantha?

Many are working as a family cooperating 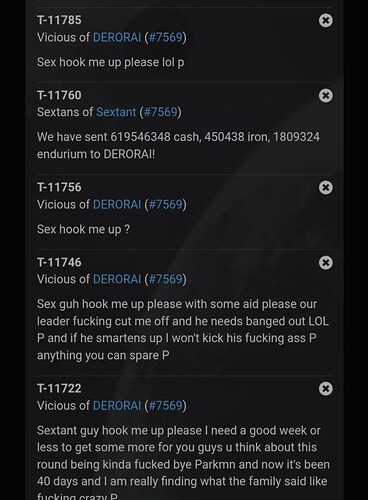 Now it isn’t possible for him.