IC Museum: A history of our home pages

In prepping an upcoming email template I realized we don’t really have an official logo. It got me feeling curious and nostalgic, so I took a trip down memory lane to look at our old logos, banners, and home pages. Join me!

This is the first one archived on the web, and the first one I remember. It’s a bit quaint, especially with those oddly shaped nav buttons.

Still, 18 years later we’re still using that main image for our logo in several places, including Discord and social media.

Here’s what it looked like the month before it changed in June 2001, sans a working registration button. 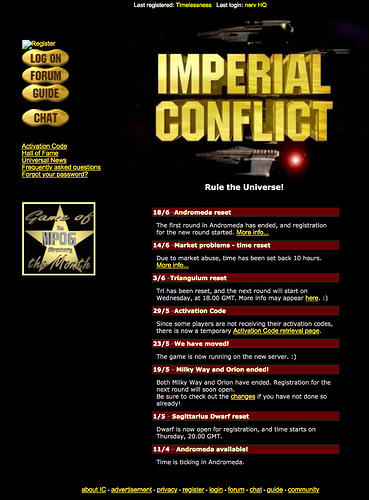 This might be the shortest-lived variant, as it was only up for 7 months, just barely making it into 2002.

I call this “The Dramatic Version” because the various overlays and transparencies in the main image. It’s a bit intense.

Below is July 2001, relatively new at the time and with a small styling error: 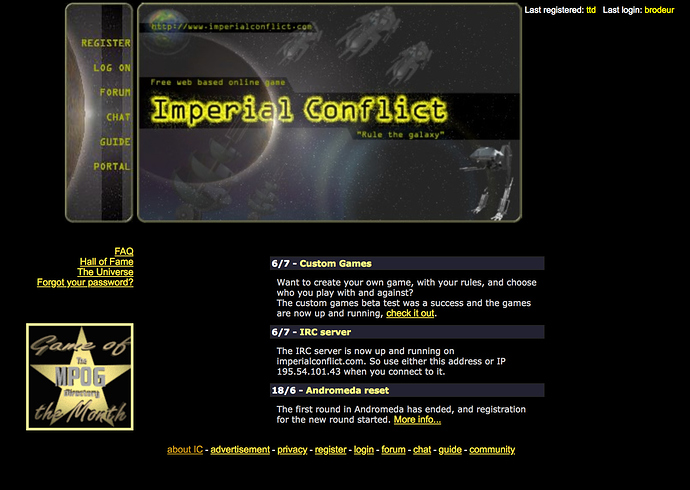 This is the first version that stuck around for more than a year. It’s also the version we ran at the height of our popularity (2005). Out of all the people who have ever played Imperial Conflict, most saw the game for the first time with this version. 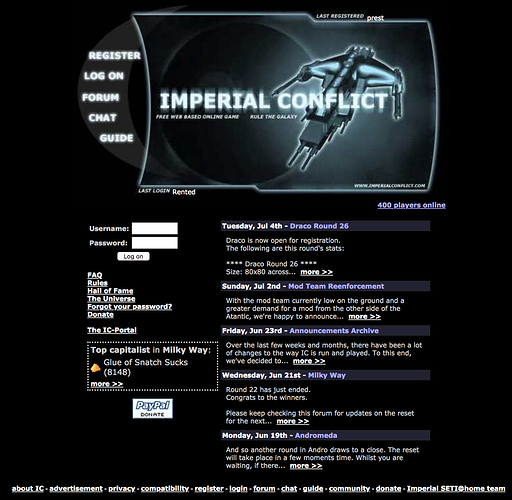 To date, this is our longest ever running home page. That’s a bit of a dubious honor, as these years represented a bit of a “dark ages” in IC’s history. It was during this era that admin/dev activity started slowing down significantly, which likely explains why this version stayed for so long. 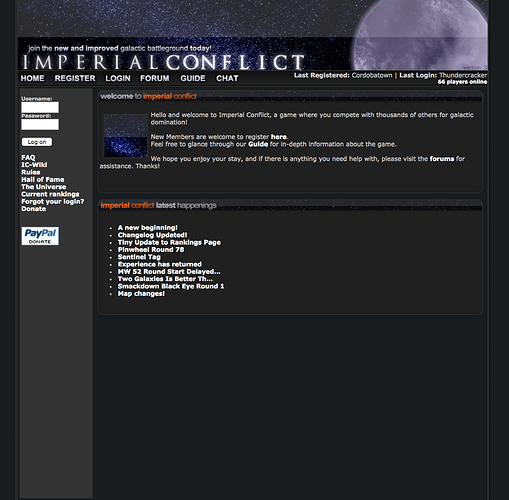 @Primo blessed us with the holiday themed version of a new home page below. Community contributions FTW!

The page design itself also had some nice improvements, including the top news-ticker that showed multiple items on hover. We also showed off our social links for the first time. 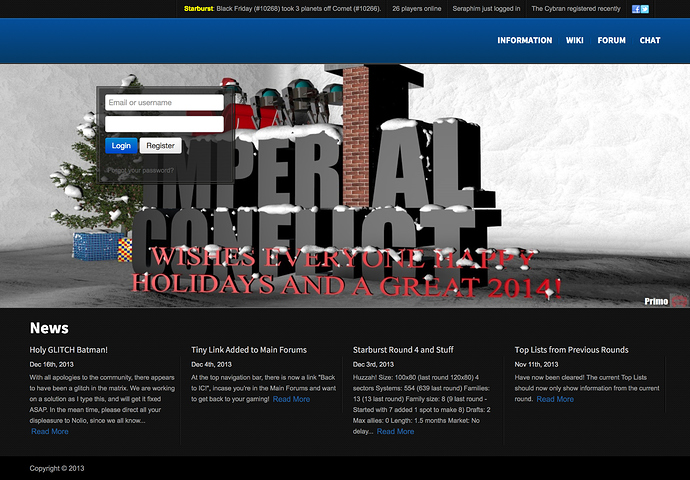 The holiday themed version went away and in its place stood the “regular” variant in all its glory. The only problem was: the main image might have felt suspiciously similar to anybody who’s ever watched Firefly. Indeed, this was a blatant rip off!

Here it is in July 2016, shortly before the ownership transition: 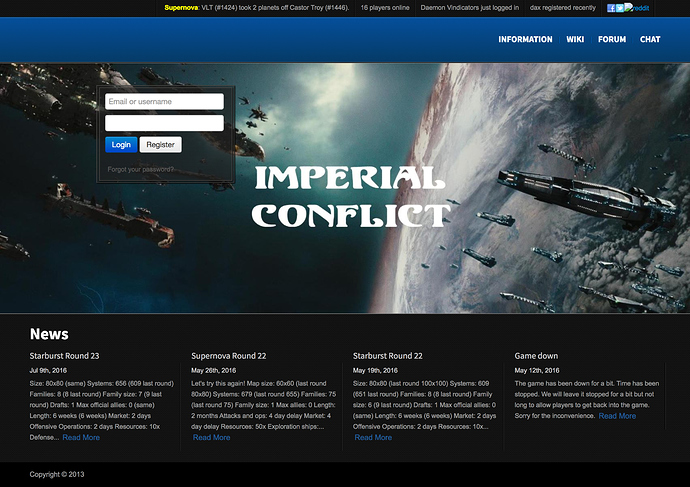 This is the first version I was ever responsible for. In fact, the very first public-facing code change I made as the new owner was to get rid of that damned image!

This updated image is still what goes out in any ads we pay for.

Other than that, it was mostly the same, aside from a new “Active Galaxies” section. Oh, and our copyright was finally updated in the footer. 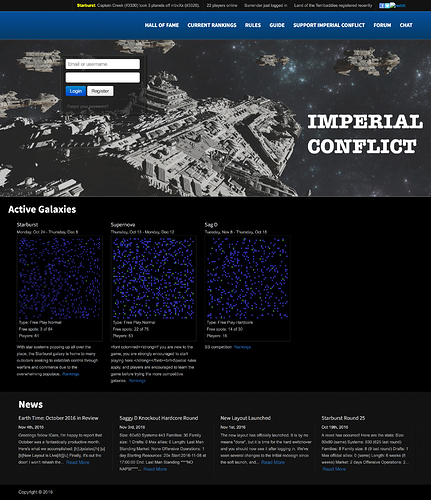 2017 to Present: The Modern Version

This is our current version! I’m fond of this one as it’s the first fully redesigned version I did. There are no relics from any old site code here, and it’s properly optimized for mobile as well.

It also gives credit out to our Patreon Subscribers, which I very much enjoy. 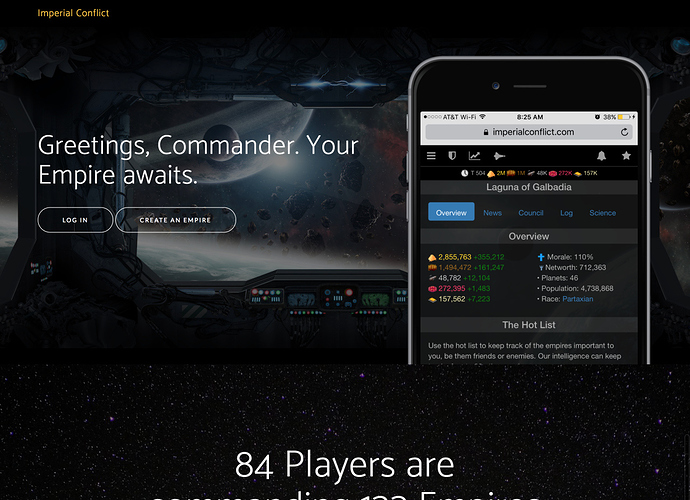 I hope you enjoyed the nostalgia.

Which one is your favorite?

Very cool overview Pie!
Confirmed I have seen all version! (under different nicknames

My vote is for the Blue Version. Could very well be that my vote is biased by nostalgia

Logged into all of them and thanks for the memories but no favorite one for me. I do like the functionality of the modern version best where you can quickly see you planet total when you pick your galaxy. Nice to see quickly if you were raided while away

Bonus: I didn’t see this in the site archives, but I just found this in our old images directory.

Apparently the Boxy version had a holiday theme as well. How festive!

If I recall the “boxy version” as named was the result of a competition which Iamsmart (think that was his name) won. The image which shows different shades (writing darker) was not the final image but for some reason the final image was never uploaded and therefore stayed as the draft. I was in the same family at the time hence why I know about the design

honestly when we moved away from the blue version i was sad, im sure it held a place in the heart of many remaining oldbies lol

That’s right! There was a competition.

Wow some serious nostalgic feelings here. I remember all of them up until the Boxy version

The blue one definitely! That’s when i started playing, playing IC instead of studying, terrible combination