As some of you may have saw, a 37 year old shot a giraffe, and is coming on a lot of backlash.

I was wondering others opinions on this subject, before I give mine. 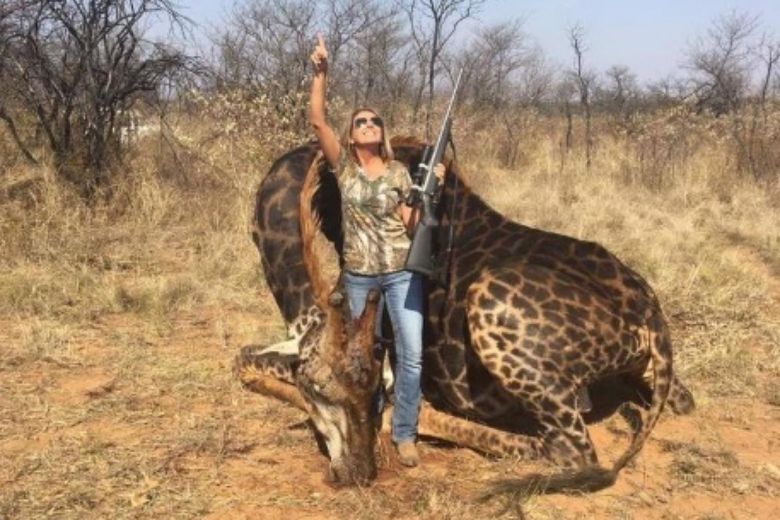 NEW YORK - Images of a Kentucky hunter posing with the body of a black giraffe she killed in South Africa have triggered an online backlash after going viral on social media. Thousands of Twitter users expressed outrage at Tess Thompson Talley, 37,...

It was an old bull who couldn’t breed and was killing young bulls in the area. Such behavior is detrimental to their species.

The hunt was sanctioned by the preserve it lived on, and all meat/hide was given to the local tribe. The money paid for the hunting expedition is used to fund the preserve itself to help the animals.

People who are outraged over this are just fucking retarded. Let nature take its course and that herd of giraffes would be gone within a few decades.

I explained that to someone and was told " go figure, a boy thinking only about breeding. Go ;"+$8_ yourself… ect" I couldn’t, I just couldn’t after that lol…

I think commercial hunting of big animals is disgusting in general.
May be that this giraffe bull was being a bitch, doesn’t take away the fact that there are more reasonable ways to treat that than getting some US based woman to enjoy shooting the animal.

I see your point, if it really was detrimental to the herd.
but I dont like when peoples problem solving is just like “Derp, Ill just shoot it”
could have maybe put it in a zoo or other kind of nature reserve?
Relocating would be difficult for an animal of its size, but not impossible.

I see your point, if it really was detrimental to the herd.
but I dont like when peoples problem solving is just like “Derp, Ill just shoot it”
could have maybe put it in a zoo or other kind of nature reserve?
Relocating would be difficult for an animal of its size, but not impossible.

It is an aggresive aging male, he is being shot because he is bad for his surroundings. Relocating that giraffe would just transfer the problem to another park. Hence no nature park pays money for old animals.

What better way would there be to end the giraffe’s life than having some dumb tourist pay top dollar to shoot it? Choke, gas or stab it to death by locals? Or wait until a young giraffe is sick of the shit and fights the giraffe for life or death which has a high change of resulting in both giraffe’s death after painful injuries?

Because this sets a precedent that it’s it’s ok for dumb tourists to come to African parks to shoot wildlife.
Maybe in this case the target was ok, but it’s not just sick or old aggresive animals that’s being shot. So yes, I would prefer local wildlife controlling teams to take down this animal, and make it clear shooting animals is not a tourist attraction

The problem with that, is most of the African preserves don’t have any money to fight off poaching.

Bidding out a fully legal hunt to the highest paying customer is the best way to generate funds. Cull 1 for the sake of the entire herd. In its death, that giraffe provided the ability to fund the preserve for many more years. Unfortunately, the world doesn’t run off good intentions and lollipops.

And putting an animal in a zoo is a terrible idea. It should be a last ditch effort to save the species. It would have been eh equivalent of putting your grandmother in hospice. It just provides a comfortable place to die and prolong suffering.

I thought this was going to be about a Giraffe/Woman Hybrid or something… Trophy hunting is gross to me … but at the same time I have personally been responsible for the murders of 1000’s of Cows, pigs, and chickens. So I guess logically this should make no difference… but it does,

I would agree in today’s times with pure trophy hunting of endangered animals. This isn’t the case of this giraffe. The hunting rights were sold to highest bidder for a specific purpose in advancing the species.

I’m addition, they got 2000 lbs of meat from this animal, which was said to have fed 200 people, including kids in an orphanage.

The old bull couldn’t breed anymore and had killed a few other younger bulls already.

I don’t see this any different than selling off any other resource to keep an area with an income. Without the income they couldn’t protect the rest of the animals.

Also @Picklearmy you’re right, it’s no different than cows or other animals you have killed.