I don’t remember a time when someone wasn’t saying the game is dying or the game is dead. I remember a time where 60 fams was a low number. I find that many players are willing to say negatives about the game ,but refuse to try to find the solutions. I could of wrote this in the think tank ,but I feel this is a discussion for the community in a whole not a vacuum of players that reached a certain level of forum activity.

Short term to negate some of the huge leads fam get in 20x plus to start with.

Disable funding research for 72-96 hrs. Yes they can still build rcs and work with their fam, but this is a much slower approach and should keep fams on the same activity level around the same spot.

Long term solution- I would say this just revolves around having a bigger player base. A galaxy where SS playing is nor encouraged and the best family strategy will prevail. However that fam obtains their growth is what it is.

A second galaxy where it is more casual a pw like galaxy. Even maybe having funding science disabled.

Other problems include farming smaller fams. This has really been a part of the game forever. At times NW restrictions would limit the differences of the fams. Am I asking for everything to be how it was nah. I understand the reason why fams choose to take easier fights.

Maybe some kind of honor system. First every planet that is taken from a smaller family -honor is obtained. And vice versa. Now it would be hard for the top fam to have honor with everyone under them. And the lowest family would always be honorable. Would this solve farming hell nah. Some players wouldn’t care and others would. That is ok also. We shouldn’t be eating our own.

I think forum activity is way better than what it was even a few months ago when I came back to this game. Keep it up be active.

There is many other things that are being worked on to either fit the short term or long term goals of Pie.

Let’s have a civilized conversation about how to get this game back on track.

One point I’d like to make early is “back on track” isn’t quite correct. This is the track the game is on. We don’t know what the “correct” track is, so I suppose that is what this thread should focus on.

One thing that I’ve been looking into a lot recently is how to create NPC empires/families.

Look at MW now - it tends to follow the same track each round:

This is largely because this is how existing players have come to play over years. The only way to mix that up a little is with some new blood… and if that new blood is, initially, powered by a computer, is that a problem?

As and when new empires join, they can replace a bot.

It’s pretty easy to know who is who, and what they’re likely to do right now in IC. With fewer than a hundred active players, you can anticipate the whole round from tick one.

Let’s add some chaos to things - and make people fight for their planets against a combination of real people and computers!

AI empires/families can add a new element to the game indeed. I also agree back on track is kind of the wrong choice of words. The game has declined and flatlined. I do think there was an increase of players for mw 68 I think.

The AI idea is interesting because it is fresh enough to retain interest from players ,but doesn’t solve some of the root issues IC struggles with.

Long term goal of having that mobile app could possibly bring in more players. Like I said there’s multiple angles to approach things. Ic needs the paddles placed on the chest and charged. A fire inside the players is evident by the most recent custom galaxies.

I would say a strong MW or whatever galaxy name is good for the game. The current MW not as much. I know some players are having fun. I am playing like many and just killing time this round. 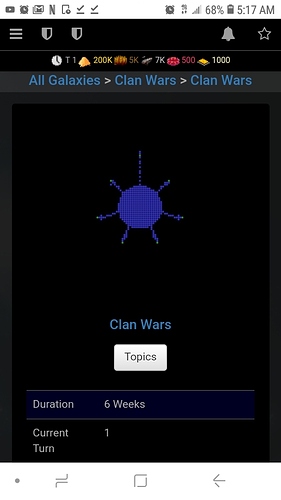 I feel like interesting maps could go a long way also.