And you lose alot of bombers even though you had enough to clear all lasers.

This may be the new norm anyway, but just wanted to add that if it wasnt as expected.

Attack report to this defence:

The fighter frame is also weird, I had 5000 figs and killed 3000 air? Could be attack bonus on that one. idk

Edit: ahh I see, didn’t read above you tho, too much ginger, didn’t see 10k bombers, now I agree that’s brutal lol

I did edit b4 you reply fatty. 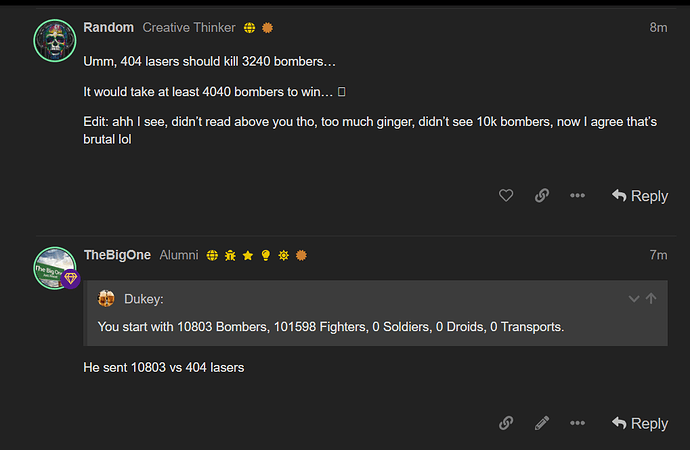 For context: the Air vs Ground battle now respect the 30% loss cap, where before it didn’t.

In that particular battle, they entirely destroy each other. This is because the Air vs Ground battle now actually uses unit attributes, where before it did not do this either.

So the code/logic works correctly. The question is, should these unit attributes be adjusted? And if so, how?

Oh yeah, also worth noting is that the turn order doesn’t exist any more for any of the phases. They are now direct matchups.

This means that you can no longer knock out lasers before they can kill your bombers and transports.

I was using this as info to work with, so running it through what I suggested in discord…

But given 86% can consider reducing the bombers, could send 2606…

Gives adaptability to reducing losses, but requires a lot more knowledge about the target, which seems reasonable.