Back in my day

We used to roleplay pretend to be generals or demons or whatever and messages were like serious some guys didn’t come out of character and if you pissed them off in character you got attacked down to your home planet and killed off and if you even brought up their name in chat they killed you too . chat is for kids and pedophiles play the game

You got a lot going on there. Are you inviting people to role play with you or are you unable to download discord or something?

I have played this game from the start of time and this never happened. Get your head out of fantasy land kid.

Catch me here or in-game if your interested not suggesting taking down forums just chat.

Of course the chatters will go nuts like before trying to expose everyone and ruin the game again if we dont make IC culture stick I may try a round this way anyway just for fun and old times sake.

Nobody is going along with this goofy shit.

Why are you so against Discord? You’re against the single biggest contributor for human evolution: communication.

And… the “chatters”? This isn’t Politics, we don’t need to start introducing defining terms for people that like the social aspect of the game.

Seconding Orbit’s response; I played this game since about 2004 or something daft like that and I have never once seen either people playing existence-long roleplaying (although there are a few “characters”… .get it…) nor played the game without some form of chat in-game, Mirc, discord etc.

Please, get something fun to do rather than spamming the forms with this frankly baseless nonsense.

I am not one to push away players but if you really don’t like it, don’t play.

I don’t understand the Discord hate, but there is some truth to the role-playing stuff: 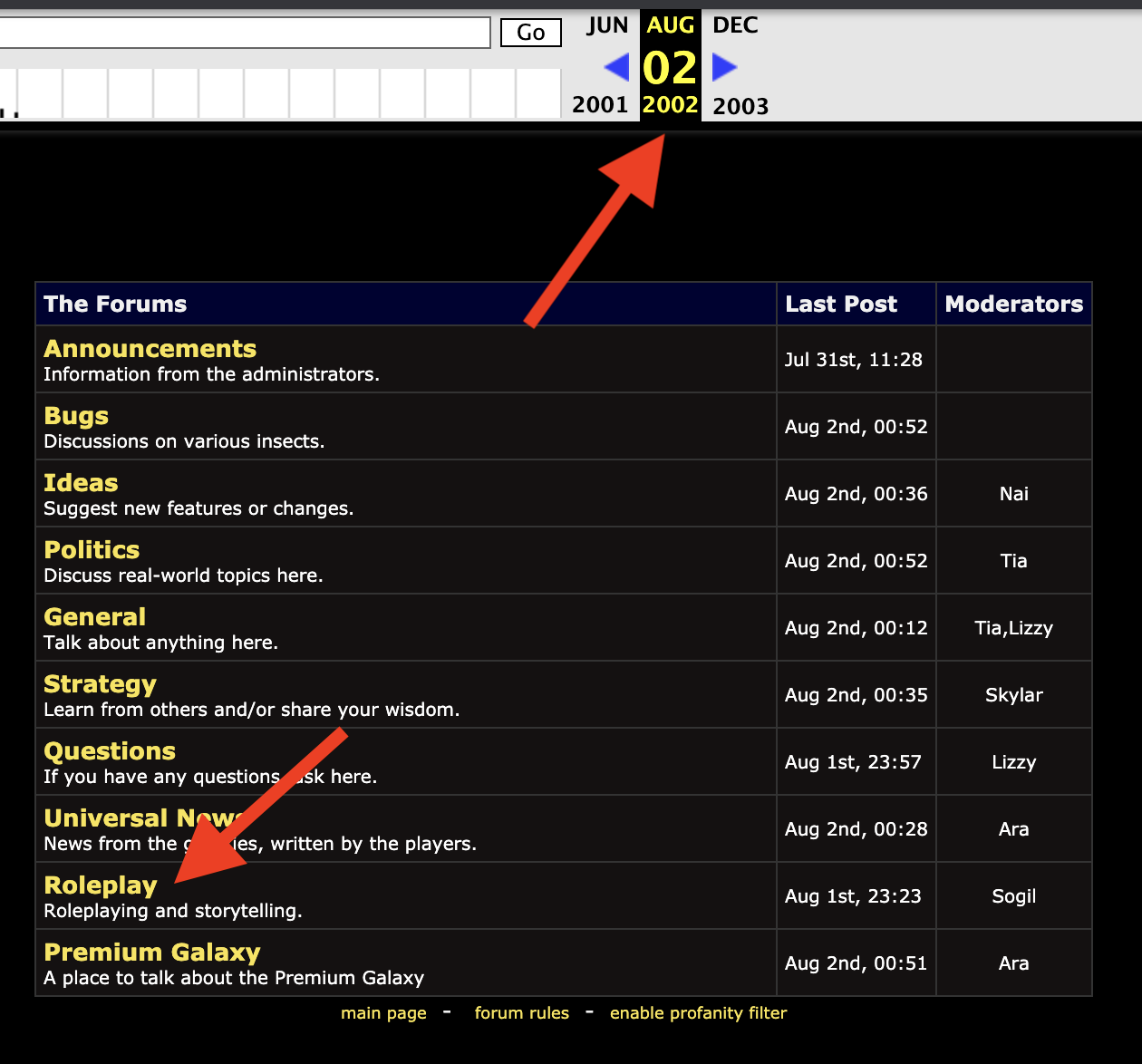 Some of this was not game related, but some of it was. We had more than a few Harkonnen and Tortuga Nebula Thugs that would play in-character in the early years. It wouldn’t be a bad thing to aim for if players wanted it, but I don’t think we could reasonably force it on people.

Attacking people found on Discord though… I can’t see any rationale for that part. There’s no way to “take down” something that players will use regardless of the game’s official stance on it. Discord accounts are not linked anyway, so there’s no way to know who a specific chatter’s empire is.

I will say though, this part is worth considering:

but not this part:

and scare our enemies into submission with abusive messages

Anonymity is already a round setting, and although I don’t think most players would bother with RP, there would be no reason any specific player couldn’t play in-character if they wanted to.

I don’t think RP is a bad thing. I actually think we did it well back in the day, and it added a nice layer to the experience. However, not everybody likes it and we definitely shouldn’t try to force it.

If you want to see Role-Play facilitated, you’ll need to make a case for enabling anonymous empires in the round setup threads. We already have that feature built as a round setting, we just need enough players to want to use it, for RP or otherwise.

Ya I played this game much earlier than 20 years ago we’ve had this argument as well but I’m saying almost 25 years ago now .

I remember paying to log in from public internet booths 20+ years ago when we had a blood gang family and that was late into the game players of old had moved on. I was not in the bloodgang family I think I may have war d them abit

I was young I’m saying that was 23 years ago so likely the game is 25+ years old.

I’m so going along with this goofy shit!

Ok it’s on I’ve got something picked out for just this round .

The elder figure slumped over a barrel of rum on the lowest deck of a rusty derelict of a once-gleaming warship, now with barely functioning life support, moves his lips and allows just enough breath to escape to form a few barely audible words…

The figure, like his ship, falls back into a near death state of existence, drifting at the farthest edges of the cosmos, oblivious of the chaos of the universe as it shrinks and many entire empires crumble and cease to exist, to be forgotten by all but a small cabal of loyalists to each.

back in the day people used to play IC they didn’t message or use a chat they just played the game and if you messaged them they would attack you I remember this, actually this could solve a lot of ICs problems if it could be enforced . Not messages not chat I recommend a black out galaxy. If someone get caught cheating don’t even bother banning them just kill them off the old fashioned way.