Are forums back yet

Nom nom anyone interested in a smaller round
Classic type game I don’t have time for these large rounds no one fights anyway these just cry to staff and cheat so I’d prefer a smaller round less work still have some fun.

I have an idea nom might not be liked but what about a blackout round.
Nom What is a blackout all communications down no round talk aloud , personal message only anyone caught talking about the round is kicked no exceptions.Nom If you don’t agree to the rules don’t play.Nom I think it might be fun if we can get serious players more of a free-for-all families of 5 I’d recommend send aid on Market on classic rules small galaxy 60 systems or so perm ban on this galaxy if caught talking about round gameplay at all?.Nom.

Even families of 3 would be fun. Nom I think for this blackout galaxy I think if they are all five families of 3 it could be fun.Nom recommend more rules 48 hour attack delay, markets and aid on , fog of war on only see if galaxy’s next to your own , pm allowed works like fog of war if possible, no evolution, no nw rule, till the death last man standing with exception of galactic overseers temporary protection , No market delay . Let me know if I forgot anything .Nom Also I suppose the planets could be discoverable so once you attacked or explode it always shows up but the others don’t if your not in the next systems I feel this would help to bring back the old feelings of randomness in the universe anything was possible so many players you didn’t know where the attacks would come from or who was doing what that has become so obvious since her decline in numbers.Nom 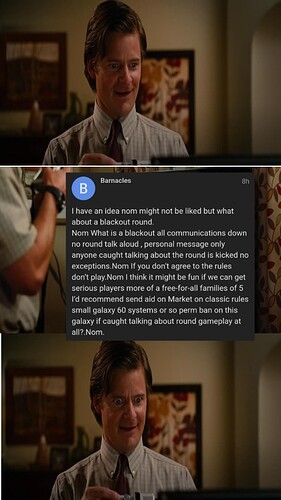