Battle has been raging since the 1v3 we endured, but we are still here and still fighting. Someone told me that nobody ever posts about wars anymore and this round was a complete joke with the bug and people quitting, but I’ll give it a shot. We, 81, are at war with 85, best of luck to both fams.

85 is currently up 50 planets in the war. I will spare the story that leads up to this point. Good luck, have fun, and stay the !@#$ out vultures.

Gl to both fams

Wait, what? So you didn’t see my simple one last round.

I read it after the round ended. I don’t typically check forums but someone was telling me a couple days ago that people never post about wars, so that’s why I am. Thanks Acitorer.

This was our fam news at the time this thread was started, below. I’m not sure how 55 planets were missing when we only have 50 more defeats than captures. They hit our bankers very hard and they took about 25% of our total planet count.

Highlights of the war

I can let you know that we explored 54 planets during that time, so that makes us +15
Don’t know what 81’s expo count over the same time, but we have hit no one else, so suggests we ended up 15ish 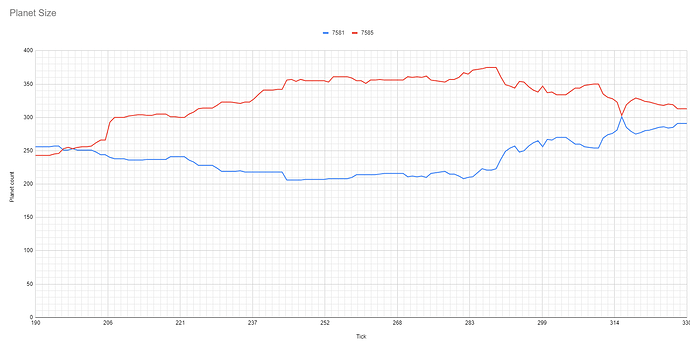 Thanks for sharing Fool, if I stick around, I might need to learn how to set up analysis like that.

You should stick around Soccer (although I may take a round off anyway, see how I feel in a week or so

But is not too hard, google sheets, script to importhtml from rankings page 1x per hour, some data cleaning in another sheet, and then chart. Could improve some a bit, and wondering if have enough space/data to do less than 1 tick scrapes (i.e. every 6 minutes for x.1 intervals) so can dig in even further to see the first engagements in cancel wars (although those seem to be less used these days)

The tool I built did the scraping of every planet each tick at least once… but occasionally the server had a bit of a struggle coping with the “load”…!

Then maybe I should leave it where it is then

It’s worth a test, but you might be ok. I was making n systems x n planets requests, you’ll just be hitting the ranking page, right?