19 took a few systems from us and offered a nap for 25 planets. We refused and took the systems back. So here we are, good luck to both sides!

Good luck to both sides. Lost planets to both fams this round.

and good luck to both sides 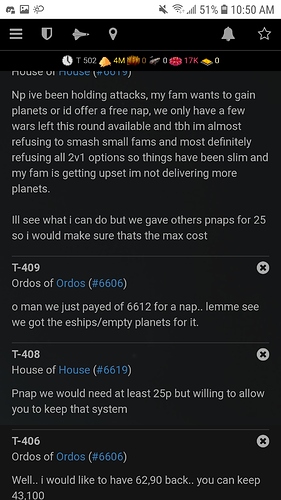 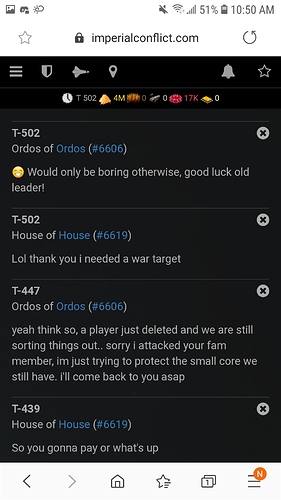 We allowed you to retake systems while you gather expos i was away for 2 days come back to find out you decided to use the time to full save and go against your word. You will now regret your poor leadership skills and choices i promise you that. Even with the fleets you added

And the war is over…

It`s true I lied about looking for the planets for you to take. I used the time to portal up and build proper defenses, but that’s all part of the diplo game imo. I really thought we would have lost this war but it looks like we actually won. We were mostly surrounded by you guys but we managed to clear most of the systems. Looks like Cells even lost leadership, hopefully not because of poor leadership skills?

Cells didn’t “lose” leadership, he gave it up so he could focus on attacking. Also this was in the very first week or two of the round. So it had nothing to do with our war with 6606.

Just thought I would clarify since there seems to be a misunderstanding of the situation.

I can second this!

ah my bad, assumed he was leader because he did most of the talking.

Lol you cleared us before we could respond. You lost tuns of infra we lost non.

Nah beating you once is enough

Super jumping fleet and attacking wile others are asleep and assuming a nap is about to be in place and was over generous and kind to you is hardly beating someone. It takes no skill to clear someone how you did it. You also only gained back your planets so beating us is not at all what you did, you defended yourself and wrecked your name for next time you assume i may be so kind